Rue Among the Leaves 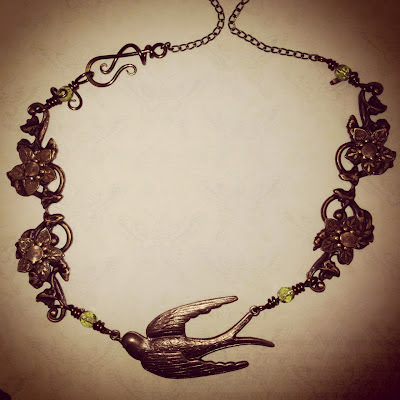 Here's our second Hunger Games inspired demo that will be held on Saturday April 7 and 14 from 2 PM at our Mapunapuna Bead Shop.  Spoiler alert for the purple text, skip to the next black text to find out how to make the necklace without any Hunger Games details!

"Orchards, huh?  That must be how you can fly around the trees like you've got wings." Thus the inspiration of Rue Among the Leaves. In the book, Rue was described as bird like due to her small frame and in her district she was able to get high up in the trees to gather fruit and see when it was quitting time. She gives Katniss a little more insight on what life is like in the other districts after they form their alliance and a friendship grows between them during that time. Rue was instrumental in helping Katniss when she was trapped up the tree and was also the one to tell Katniss how the mockingjays could be used to communicate messages.

The majority of supplies used were from Vintaj.  I took the deco vines filigree and cut it in half with wire cutters to get the vines.  Then I used a chasing hammer to flatten 4 foli bead caps to make them look more like flowers.  I used the metal reliefing block to bring out the gold highlights in the vines and flowers just a bit.  Then I threaded rivets with gold 6mm heishi from Sierra Pacific Crafts, then the flowers and hammered to  attached to the vines.  Most of the rivets worked fine but there was one spot that gave me some trouble because the space between the vines was a little bigger so I just used some 2 part epoxy to glue it in place instead and it worked like a charm!


I used the Soaring Sparrow for the center piece and wire wrapped 20 gauge wire with 4mm fire polish beads to connect everything.  Because I wanted to echo the vines theme in the wire wrapping, I made looser wraps and coiled the ends to mimic the tendrils.  20 gauge wire was also used for the j hook and since it's pretty enough, I have it visible in the front which also makes it easier to put on and take off.  I used the delicate chain from our Sweet Beads line and the color matches perfectly with the Vintaj findings.


Well, that's it until next week when I'll have another jewelry piece inspired by the Hunger Games so stop by the Mapunapuna bead shop for the demo or to take a closer look at the jewelry!  I'll see ya later!

Posted by Mapunapuna BFC at 2:00 AM

Thank you for visiting our blog! Visit us also at the following sites:

Have you made any of the projects featured on Crankin' Out Crafts? Share your creations on our
Ben Franklin Crafts Hawaii Facebook Page!

Watch Crankin' Out Crafts Episodes on our Youtube Channel:
www.youtube.com/bfslocations