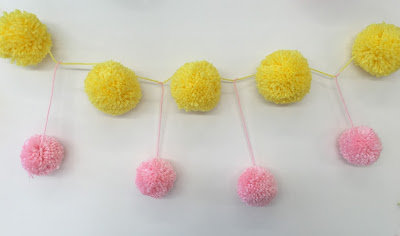 Something different compared to a pennant garland. Adds a cute fun touch to any occasion. Great for decorating a room too.
What you'll need
Clover Pom Pom Maker
(comes in four different sizes, 2 large and 2 small)
Any Desired Yarn
(whether it'd be cotton, wool, or my favorite :) , baby soft)
A REALLY Sharp Pair of good Scissors
(I liked using Fiskars) 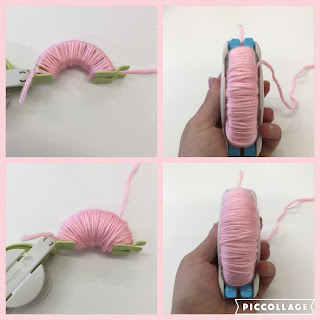 With your Clover Pom-Pom Maker flip up the half circle arms and begin wrapping, and wrapping and wrapping. Back and fourth approximately 4 times from left to right. Then beef up the middle as seen in the right side pictures. Repeat onto the other half of the arms. Since you should've ended up on the right end as shown below, you can easily continue with the same strand of yarn. Rather then cutting it and worry about it unraveling. As seen below, to keep it from slipping away, bring your strand between the two arms and then continue wrapping, repeat your first steps. 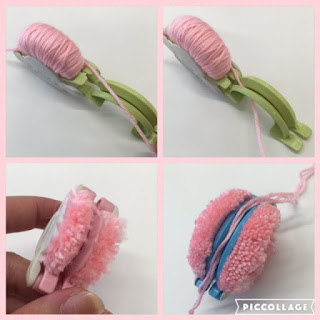 After you've completed wrapping both halves, grab your really sharp scissors and cut your yarn down the middle on both halves like so. Careful as to not pull at the yarn. Cut two pieces of yarn, for tying and securing your pom-pom. Make sure you pull it and it's nice and tight! The reason for doubling up on the tie is because I kept breaking my yarn. After securing the pom-pom, your maker splits into two. Lift the halve circle arms up and pull on the white part, away from each other. You're going to want to leave your long pieces hanging out from securing your pom-pom. That way you can tie your pom-poms together or use it for key chains. 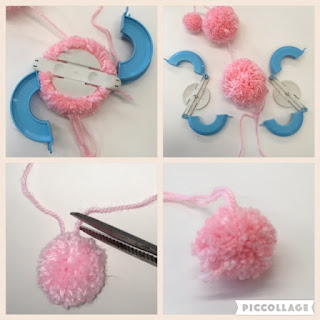 Not quite done yet, now the fun part. Shaving your pom-pom down into a perfect circle. Do not use a buzzer. You'll have to do it traditional barber style and use your scissors. I recommend trimming little by little. Because you don't want to take off more then necessary. If your want to do a vertical strand of pom-poms as seen below, before detaching your pom-pom maker, tie your previous pom-pom onto your current one on the opposite side from your current pom-poms secured line. Repeat to desired length. 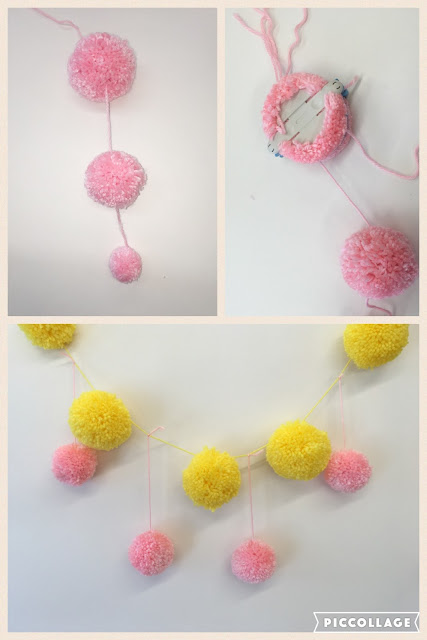 Posted by MarketCity BFC at 9:35 PM

Thank you for visiting our blog! Visit us also at the following sites:

Have you made any of the projects featured on Crankin' Out Crafts? Share your creations on our
Ben Franklin Crafts Hawaii Facebook Page!


Watch Crankin' Out Crafts Episodes on our Youtube Channel:
www.youtube.com/bfslocations